Review of The Farmers' Museum in Cooperstown | Kids Out and About Minneapolis/St. Paul

Review of The Farmers' Museum in Cooperstown

The Farmers’ Museum has beckoned to me for years now. I relied on some of their research when I was a museum educator at a small farmhouse in Manhattan, so I’ve been curious. But I’d assumed, given the name, that it was pretty farming-focused, and I wasn’t sure if my kids would enjoy it. I was profoundly wrong on both counts. As we approached, it was clear that the museum has plenty that’s entertaining for all ages. 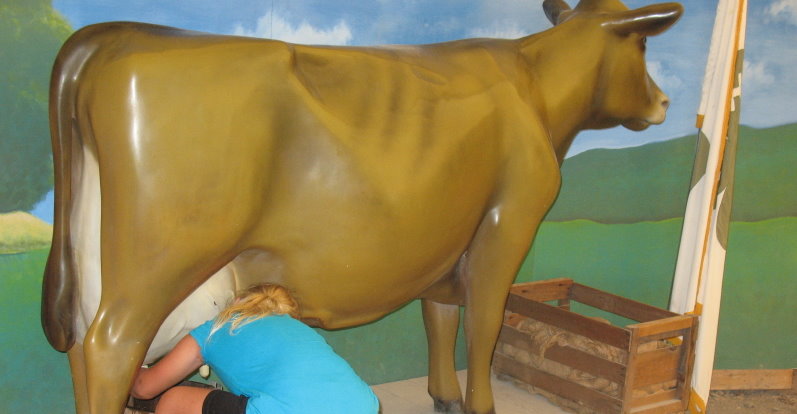 First, the details: admission is $12 for adults, $6 for kids ages 7 to 12, and free for kids under 7 years old. There are picnic tables and indoor space for families to lunch or snack on their own, and there’s a Crossroads Café with sandwiches, soups, snacks, and drinks. The museum itself is just across the street from the Fenimore Art Museum if you have the energy for both in one day. We didn’t, but I’m deeply impressed by you if you do! The best time to visit is May to October. From January to March they’re closed except for special events, and hours are more limited when it’s chilly. The Farmers’ Museum is set up as a mid-nineteenth-century village, so visitors are constantly walking in and out of buildings.

We started at the Main Barn, which contains changing exhibitions. Through October, it’s about New York State foods. My children were interested, but we passed through pretty quickly. Still, it was enough that my older daughter asked if the barn was the whole museum. Nope: we were just getting started.

The enthusiasm ramped up quickly with the Country Fair area, where we all tried an assortment of late 19th-century and early 20th-century games. We played with hoops, lawn bowling, the Game of Graces, the Jacob’s Ladder toy, among others. They were well-supplied, which meant that the kids could get their hands on the activities without waiting, and the friendly staff person stationed there offered technique tips for visitors without being heavy-handed about showing the kids the “right” way to play.

The Empire State Carousel fit with the fair theme. As we approached, I saw a sign about purchasing tokens somewhere else and irritation was about to set in as I anticipated finding a new location to purchase overpriced tokens. Instead, the kind carousel helpers reassured us that cash was fine, and at 50 cents per ride, all bitterness melted away. The carousel is awesome. It is composed of New York State animals, each hand-carved with humor and personality, a project that took more than 20 years. Famous quotations, carved portraits of famous New Yorkers, and panels depicting places and events in New York State History made me wish that we’d taken the Carousel Tour. Or at least that I could spend more time looking between rides, because trying to watch while it was turning gave me motion sickness. It was our favorite carousel ever.

Throughout the village we observed people printmaking, blacksmithing, cooking over an open hearth, working with herbs, and more. The kids had the opportunity for hands-on activities like helping to make rope. A children’s barnyard offered close encounters with farm animals. My favorite feature was that it included a real sink with soap, which feels so much better than just using the hand-sanitizer pumps! Another hit with the kids was the More House with its garden maze in the backyard. The General Store offered hand-spun yarn, herbal concoctions, pottery, prints, and other items made around around the village.

On the day we visited, activities continued throughout the day, including scheduled presentations of different skills, tractor rides, milking the cow, and feeding baby animals. However, there was not too much urgency to follow the schedule, because the staff constantly offered to share more information. Honestly, I’d say that my kids enjoyed it more than our visit to Colonial Williamsburg, and not only because Cooperstown is not as hot as Virginia in the summer. The staff were eager to share information, but the smaller scale meant that interactions felt like relaxed and informal question-and-answer sessions, instead of the rehearsed schpiels that can make the most interesting topics appear boring to children.

We loved our visit to the Farmer's Museum, and we'd highly recommend a visit.