Rocopoly: Rochester Rocks Monopoly | Kids Out and About Minneapolis/St. Paul 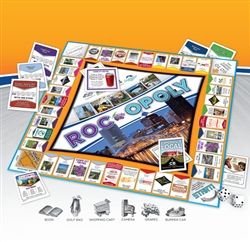 I was very excited to try Rochester's new version of Monopoly. My 9-year-old son loves to play Monopoly, and I usually dread the thought of pulling the game out, only for my 7-year-old daughter to lose interest after 15 minutes and my son to want to play until the very end…5 hours later!

I am not a native of Rochester and have only lived here for about 5 years, so I was interested to see what properties would be included. Although I think everyone who played this game agreed that Wegmans was most definitely missing, it did show a true representation of Rochester, as I have come to know it, anyway.

The rules of Rocopoly are very similar to the familiar Monopoly game, so setting up and getting started was easy. I liked that the experience local cards, have some fun, Rochester trivia, and even funny facts that we all could relate to. My daughter did play for way longer than her typical attention span, so I was impressed. I think the familiar names and pictures kept her interested and made it easier for her to relate to the game.

Overall, it was a fun game play that kept the family all together doing the same thing for an hour or so. The game is most appropriate for ages 8 through adult. My recommendation: before the game, use the properties to make your family Rochester bucket list. Cross off where you've been, then make a point of visiting the rest of the venues over the next few months! It's a great way to anchor your kids in their community.

For the next edition, I would love to see Kids Out and About make an appearance! Maybe players could lose a turn for not checking KidsOutAndabout Rochester before making their weekend plans! You can find Roc-opoly at myfavoritetoybox.com