Beyond the Nest Reviews Wallbyrd Theatre's Who's Afraid of Virginia Woolf | Kids Out and About Minneapolis/St. Paul

Beyond the Nest Reviews Wallbyrd Theatre's Who's Afraid of Virginia Woolf 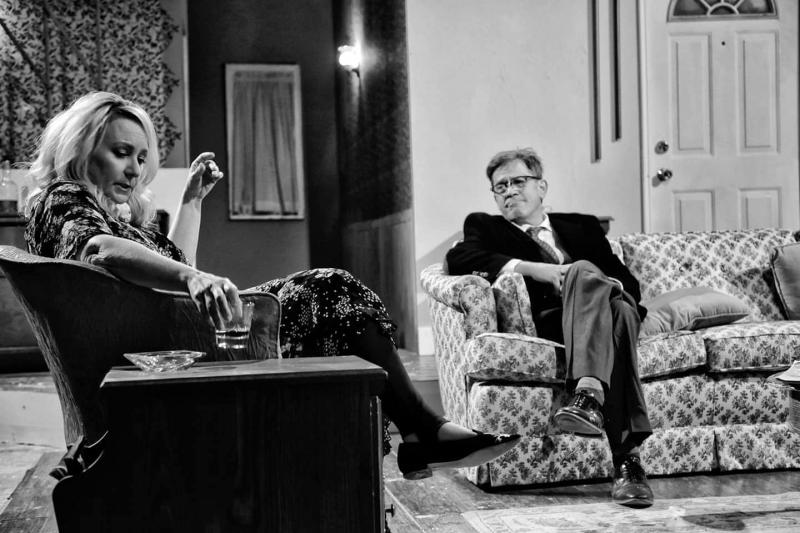 In Wallbyrd Theatre Co.’s production of Who’s Afraid of Virginia Woolf, by Edward Albee, life becomes a bizarre high-stakes game where, with each roll of the words, partners become opponents and even the game’s spectators become ensnared.

Written in 1962, Albee took inspiration from a couple he knew in real life to set up a play that mocks society’s norm of the model 1960’s family, in which couples are all happily married, the man has a satisfying, upwardly-mobile career, the woman is a happy, stay-at-home mother, and they have 2.4 well-behaved children.

The contentious relationship between Martha, the daughter of a university president, and husband George, a professor at her father’s university, is played out in front of an unwitting young couple, Honey and Nick. At Martha’s invitation, the two have followed Martha and George home from a university party in the wee hours of the morning, presumably in the hopes of furthering Nick’s career as the newly-hired biology professor at the college.

As the perennially unhappy couple, Kevin Sean Sweeney as George and Dawn Marie as Martha give vibrant and nuanced performances. Each booze-fueled verbal barb the two characters hurl has been dipped in their own deep well of life’s disappointments…absence of a loving parent, absence of children, and absence of advancement. They use games and verbal gymnastics to fill the voids in their life. 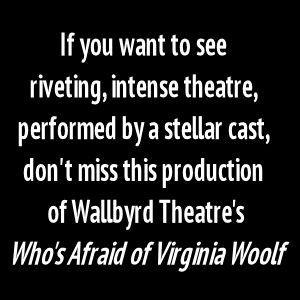 Once the characters begin peeling back layers of revelation, we discover reality and fantasy are quite fluid in this game, and the key is to decipher which is which.

Kiefer Schenk gives a solid performance as the upright guy Nick, who married his long-time sweetheart, believing she was pregnant. It is not until he makes moves on Martha, at her invitation, that we discover he is not as “stand-up” as he seems.

Initially appearing to be a naïve, compliant, and perfect wife, Sarah Kingsley resonates as Honey. Once the brandy works its magic, she loosens up enough to perform a dance that is simultaneously childlike and sensual. Upon discovering her "secrets" have been revealed, she quickly regathers her inhibitions about her again, as if they were veils, cast off for the dance.

This production of Who's Afraid of Virginia Woolf is gripping, thanks to Virginia Monte’s masterful direction, the strength of the actors, and the play's realistic characters. The other reason it engrosses – in spite of, or because of the dysfunction within the characters’ relationships – is because we’ve all been unsuspecting observers in awkward social situations gone awry, where angry emotions and things better left unsaid bubble out. We understand and empathize with the discomfort of the young couple. We also understand why they stay -- because it would be more awkward to leave, and because they've somehow, unintentionally, become participants.

When it first appeared on Broadway in 1962, winning a Tony award, Who’s Afraid of Virginia Woolf was ground-breaking. Happily, it stands the test of time, because there is raw truth at its core. I like to believe that, in spite of their flawed relationships, the couples do love each other in a volatile, ambiguous way.

If you want to see riveting, intense theatre, performed by a stellar cast, don't miss this production!

Who’s Afraid of Virginia Woolf runs through November 18 at Wallbyrd Theatre’s new home at the Avyarium, located on the second floor in the Village Gate.