Beyond the Nest Reviews Native Gardens at Geva Theatre Center | Kids Out and About Minneapolis/St. Paul

Beyond the Nest Reviews Native Gardens at Geva Theatre Center 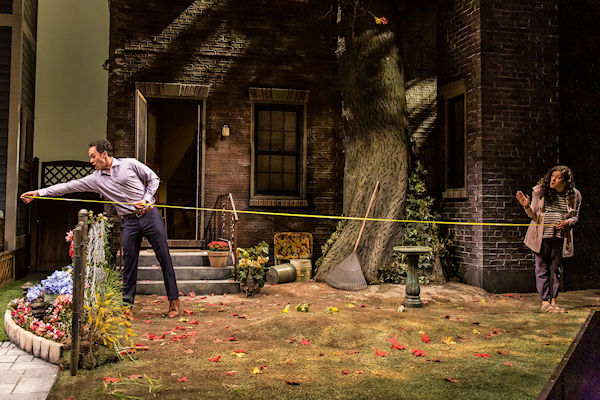 Native Gardens opened at Geva Theatre Center on April 30, and if this production is an example of Karen Zacarías’ other works, it is no wonder her plays can be seen on so many stages across the U.S.

Produced by Geva Theatre Center in association with Syracuse Stage and Portland Center Stage at the Armory, Native Gardens’ lights come up on the lush backyard of a stately home in a historic neighborhood of Washington, D.C., next to the “in a state” home with a likewise-neglected backyard. The former dwelling is the residence of Virginia and Frank Butley, a settled, wealthy, older couple of staunch Republican persuasion who pride themselves on their beautiful, traditional garden, which is lovingly cultivated and tended by Frank.

The latter residence is the brand-new home of Tania and Pablo del Valle, an up-and-coming young couple of Democratic persuasion who anticipate the arrival of a baby. Tania is anxious to turn their backyard into a showcase native garden, designed to draw earth-friendly insects, birds, and bumble bees, to the horror of her pesticide-wielding neighbor. The deadline for the del Valle's garden transformation gets moved up dramatically when Pablo, the newest (and token Hispanic) addition to his new law firm, extends a company-wide invitation to a party at their home, which is to take place in less than a week. Who would imagine two gardens, one fence, and an impending deadline could provide such rich fodder for physical, situational, and political comedy?

After a short-lived “honeymoon phase” between the new neighbors, the clippers come out and you never know what may be ripe for pruning!

As Virginia and Frank Butley, Anne-Marie Cusson and Paul DeBoy make a great team: She, strong and feminist, yet protective…he, zealous to the point of being humorously manic. They are equally balanced in talent against Erick Gonzalez as power attorney Pablo del Valle and Monica Rae Summers Gonzalez as grad student, and Mamacita-to-be, sassy Tania del Valle. As the stakes ratchet up on the war of the gardens, so does the machismo, creating a hot house for comedy. Combined with masterful direction by Melissa Crespo, these four make physical humor and facial expressions bloom as an art form.

Part of what makes this play so funny – beyond the skill of the actors – is the way the playwright weaves in today’s social landscape. Although Zararías penned this play before the 2016 primaries and border wall expansion discussions to further separate “them” from “us,” she had her finger on the pulse of this country’s hot buttons. Often, humor is a more powerful lens than preaching. In creating characters in which we see a bit of ourselves,  Zararías gives us a way to laugh at our foibles, while showing us clearly that intolerance is a two-way street.

Native Gardens blossoms on Geva's Wilson Stage through April 21. This is one lawn & garden show you won't want to miss!